Archive for the category “Baseball”

Hardball with the Boys

“Baseball is the most perfect of games, solid, true, pure and precious as diamonds. If only life were so simple. Within the baselines anything can happen. Tides can reverse; oceans can open. That’s why they say, “the game is never over until the last man is out.” Colors can change, lives can alter, anything is possible in this gentle, flawless, loving game.”
― W.P. Kinsella, Shoeless Joe 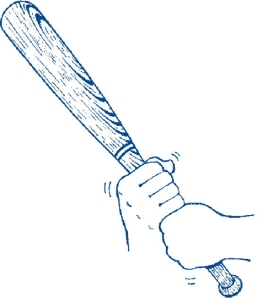 Choke up on the bat, step into it and swing!

In our big house we had on the west side of the suburb we lived in, the new side, the boys played baseball in the street all summer long. The streets were new and made of cement, so I asked my dad and mom to get me a really thick pair of jeans, because I was going to play. They didn’t question me. I had played with the boys in our last neighborhood too, because I was very active and athletic — a tomboy as they called us in those days. So I informed the boys on the block that I was going to play baseball. “Shoot they said. “You gotta beat up every guy on this team to play with us.” They were pretty confident and laughed a little, because I was small and didn’t appear to have much meat on my bones. What they didn’t know was that I was determined, tough and wiry. So I fought each one of them, wrestled them to the ground and held them down until they said I could play. From then on we were teammates. We played every day of that hot summer in t-shirts and long jeans to protect at least our legs from the cement when sliding into home plate. I played first base because I had a good arm and I was fast — mentally and physically. One thing I wasn’t was a power hitter. I just couldn’t get a could crack at that hard little ball.

Bob Allison from the Minnesota Twins lived on our street and he had two really young boys. We idolized him, but never saw him. Once in a while we saw his pretty wife and their two young boys outside, but never him. Then one day, I was up for bat and pretty as you please he strolled over to the middle of the street, home plate. He asked me how my hitting was going and trying not to drop my jaw, I told him it wasn’t going very well. He said, well that bat is to big for you, you’ve got to choke up on it a bit. And then he showed me how! I was just about to scream I was so excited, but I did just exactly what he said.

Once he felt I had mastered that — by now our whole team was surrounding us at home plate — he had another tip for me. And for some more power, he said, you’ve got to step into it when you swing. He showed me how to take a step forward as I took a swing with my hands raised higher on the bat. Then he had a couple of balls pitched to me. Those guys weren’t going to do me any favors. We were teammates, not friends yet. The pitcher fired in a pitch, STRIKE! The catcher threw it back and he fired in another one. I took a deep breath and blew it out, to a step and swung… CRACK! Impact! That ball soared. Everyone around us jumped back and I ran like lightening. I wanted Mr. Bob Allison to see I was going to take advantage of his handiwork. First base whooosh…. second base whoooosh….third base…whoooosh…and I was on my way home! I slid into home SAFE! All but my jeans, shredded them, but man, the grin on my face! Mr. Bob Allison was looking over his shoulder and nodding from his driveway. It was time for him to go home.

What a great summer day. A legend appeared out of the shadows and taught me how to swing a bat. My teammates and I were suddenly friends. I had earned their respect. I’ll never forget it!