“A hug is worth a thousand words. A friend is worth more.”
True friendship is like sound health; the value of it is seldom known until it be lost.”
― Charles Caleb Colton

I have three best girlfriends, well one is hanging by a thread, but is still dear to me in my heart. The first one, Lynn, I have written about many times. We have been friends since we were thirteen. I would have known her sooner because she lived in my neighborhood, but she went to the Catholic school through 7th grade. I met her when she started at my Junior High in 8th grade. She is beautiful and funny and so great to talk to — I have loved her like a sister for many, many years! I just had coffee with her Friday. Lynn and I will always be the very best of friends.

The second is Laura. She went to my church when I was it my late teens but I didn’t know her well. She dated my brother Bill for a short while. I thought she was beautiful and sweet. Later when I was in the hospital with the life-shattering first bout of Bi-Polar disorder that knocked me down when my son was 9 months old, she visited me. I remember her coming after Davey had died.

Yes, my little Davey died while I was in the hospital. It broke me and nearly finished me to lose him and not get to say good-bye. I went to his reviewal and funeral, that was all. I was accompanied by a loving, strong psychiatric nurse to help me. My family was wonderful, I remember my dad and my brothers the most for some reason. Possibly, they were holding me up. They’re all big guys. My dad is 6 feet and my little brothers are 6’4 (Scott) and 6’2″ (Bill). Somehow I got through. I don’t remember much of it, so I must have been pretty medicated, but I do remember my dad and my brothers. I remember the minister and some of the soothing things he said. He was my favorite pastor is still my dear friend and Facebook buddy, Arthur. We go for coffee together. What a dear man he’s always been to me. All this is probably why I remained in the hospital another month trying to kick back the depression that had followed the severe mania. It took many years for my heart to heal.

I know Laura wanted to help me. She and my mom were good friends, so she knew I was in a depression. She stopped by one day with a ball of yarn and some knitting needles saying she was there to teach me to knit. I wasn’t much interested in learning to knit, but I was very interested in getting to know Laura better. We became fast and forever friends. Laura and I share the same birthday and are only a year apart in age, me being the oldest.

Jessie is my third best friend. We got to know each other at age 18 and were fast friends. We met through our moms who were in a bible study together. Jessie is fun and funny, beautiful, full of faith and yet slightly irreverent, loves her family and is a great gal. Somehow though we have managed to grow apart.

For over 30 years Lynn, Laura, Jessie and I celebrated our birthdays together, every year, around mine and Laura’s day. Lynn and Jessie were born in July, Laura and I in June. It was a fun summer luncheon at a restaurant of our choice each year. Hours of conversation packed with love and friendship, laughter, hysterical birthday cards, party favors and general merriment ruled the day. And from the very first lunch, even though they are my best friends and had never met each other before! Here are some pictures: 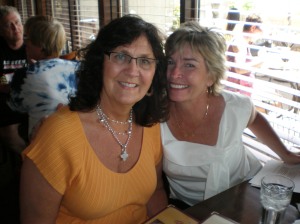 But Jessie didn’t make it to all of them. She started missing more. Last year we talked about not inviting her. I was hurting our feelings a bit. But now I don’t know. Jessie is a great friend to me. My first Valentine’s day without my ex and my son, she and her husband Don stopped over with a Valentine for me that evening in the middle of their date. I was pretty moved. It made the night wonderful, not unbearable in fact. I’m calling Jessie tomorrow to see how she is. Her grandchildren keep her pretty busy. None of the rest of us have that dimension in our lives. I want to see how she is and tell her I love her. It’s pretty hard to top the powerful bond of girlfriends who have been with you going through what I went through. It’s just not right to ever let them go!